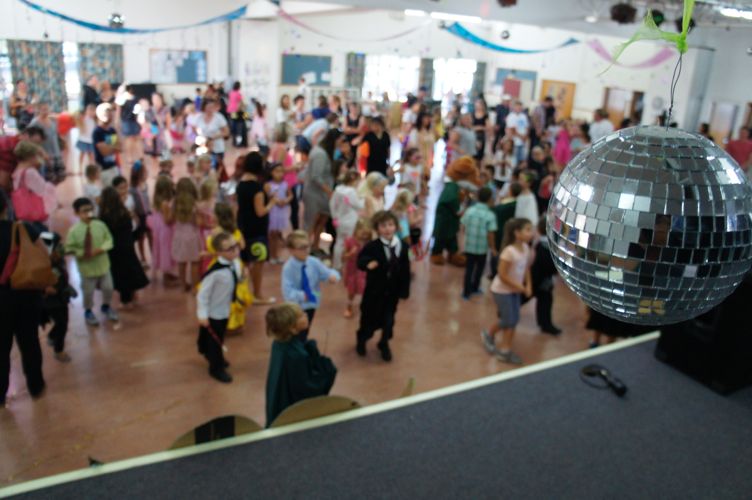 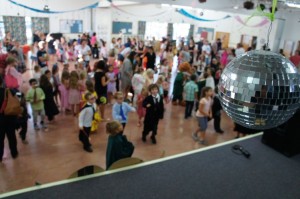 Years 1-3 danced the night away from 5:00-6:00 PM. Years 4-6 burned the oil from 7:00-8:00 PM. Teachers were wise to separate the groups. Younger kids dispersed like noble gases throughout the room—looking unaware but unselfconscious. Older kids clustered. Girls circled in small tribes, comparing outfits and giggling. Boys showed off, performing antics disguised as dance moves.

Milo and Sophie did not receive the “best costume” award. But they did have the most fun. Before the dance began, Milo hit the crowded playground. Girls latched on to each arm. He pretended, badly, to be annoyed—not fighting too hard to shake his shackles.

He then jumped into the moshpit and never left. Hopping, sliding, jigging and gyrating, his boundless energy lasted until he collapsed into bed that night.

Sophie beamed. And ran around the dance floor chatting it up with friends. Enchanted by the DJ, she boasted of his musical tastes, which included One Direction and the Kangnam Style song.

By the time I picked up Sophie at 9 PM, it felt like midnight. Hard beats and soft lights changed to bright lights and tired talk. Musty smells and night air brought back memories of Orem High School dances. Leaning against the wall, I tried to look cool, glaring at girls who ignored me all night. YES, I’m talking about YOU Natalie Marrot and Shane Roberts. (Shane is a girl by the way. Not that there’s anything wrong with “that.”) My kids are having more fun at primary school dances than I had in high school. But, I am now old enough to start living vicariously through my children!