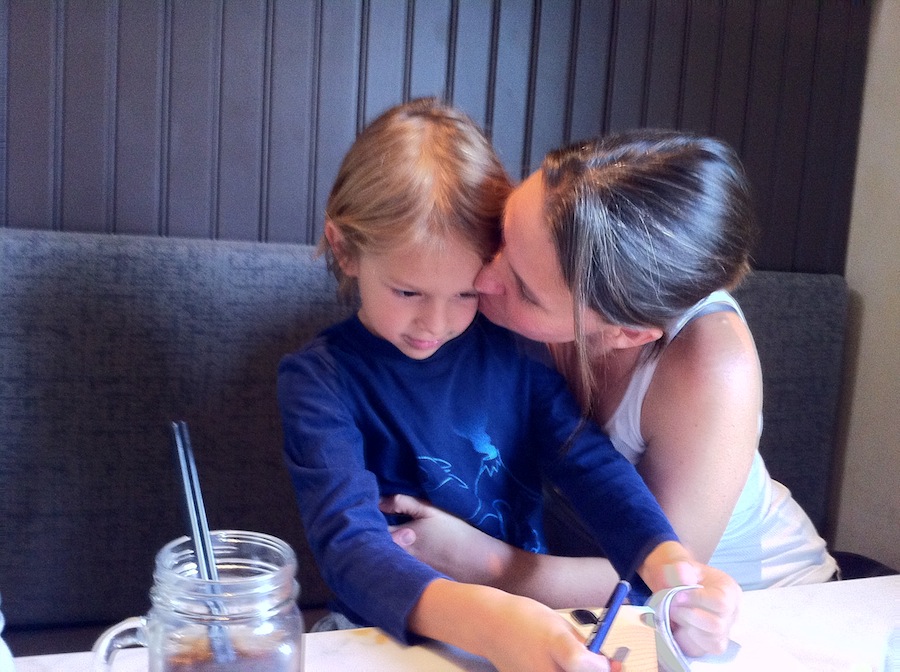 Ok, not an epic road trip, but adventurous nonetheless. We stuffed a year’s worth of luggage in the trunk and week’s worth of camping gear on the roof. With no racks, we used ratchet tie-downs and yellow nylon straps. These, dangling from an ill-fitted canvas storage bag, we looked a little like modern-day Joads from Grapes of Wrath. Unpacking and repacking the car, to find a lost toothbrush or action figure, was like playing Tetris. The car was heavy. And it felt that way, meandering through Logan Canyon. I checked the gas gauge several times, expecting to perceive actual movement of the needle toward empty.

Click on the photo for more photos.
[ReflexGallery id=’9′]

After a quick detour to the Fossil Butte National Monument (which far exceeded our expectations), we sat on the grass and listened to folk music at the Oyster Ridge Music Festival in Kemmerer, WY. Stuffed with corn dogs and cotton candy, we retreated to Kevin and Jamie’s place, a 10-acre refuge 2 miles north of bustling city life in Kemmerer. “What are you doing these days Kevin?” prompted a visit to his self-manufactured barn–a virtual art studio–sculpture, wood-burning, drawing. He then covered the kitchen table with a map of his day job at the FMC soda ash mine. At a depth of 1800 feet, the mine spans an area the size of downtown Logan and includes more roads than San Francisco. Kevin regaled us with stories of rock extraction turned baking soda, and new descriptions of “dark” when headlamps fail.

We rolled into Midway the next day. Susan, Brynja’s mom, gracious as always, fed us well. After a good night’s sleep, we attended cousin Lexi’s mission farewell, hoarded some h’orderves, and drove to Provo. Here, the kids hung out in grandma and grandpa’s trailer–played cards and made pretend toilet trips. Alone and nostalgic, I took a short jaunt through the 32nd Ward neighborhood. I drove past familiar houses–the Higleys, Roberts, Cooks, and Bledsoes. These people, along with countless others, provided the stuff of my idyllic childhood. I felt 700 years old, and reincarnated, driving around this place.

The next stop on our blast-from-the-past tour was Loa, Utah. Grandpa’s small house, now empty, is surrounded by old trees, an old barn and “for sale” signs. Grandpa Dent was born here. He came of age sooner than most kids when his father died of the Spanish Flu in the twenties. Dent was nine years old. He became the man of the house and never stopped working until his own death sixty years later. It was here, in this tiny home, that Dent also saw the death of his baby brother and step father.

We spent a good long time here, trespassing I suppose, looking at the hills on the eastern landscape. These are the same hills grandpa must have looked at between plowing fields, milking cows, and wrestling with siblings. With his thick wavy brown hair and mischievous smile, I’m sure Dent was even more of a prankster here, than as an adult. Dent, the father who made up little tunes about mom’s schoolhood friend Juanita. “Juaneet, Juaneet, go wash your feet. They smell so bad, I can hardly eat.” It was fleeting, but I felt weaved into this land, and the people who lived here.

We pitched our tent in Fruta–the only developed campground available within Capitol Reef National Park. It’s green, and adjacent to the Fremont river. Surrounded by desert, being here felt more like backyard camping than roughing it. The close quarters of several hundred campers put fear into me–noise! But oddly, there wasn’t any. No Ted Nugent blaring from vans, no dogs barking or dog owners barking at dogs, no loud laughing by inebriated hicks, no smoldering trash and no noisy generators. Our own children were by far the noisiest element for miles. It was almost eerie. My theory–Europeans. Europeans with their fancy gear, minimalist lifestyle, and refined etiquette.

National Parks in Utah–illustration is better left to photos than words. But watching the children turn nature into playground is always rewarding. Our excursion started with a long family hike (sloughing along at one mile an hour, long in time, not distance). Milo soon informs us he had morphed into a “mythical creature.” With clenched fists and squatting haunches, he understood our language but could not speak. He jumped and skipped along the trail, occasionally hiding behind large boulders like an orphaned marmot.

Even a 49-dollar hotel is a welcomed sight after camping. The kids were oblivious to bad decor and thin walls. There was a swimming pool and electrical outlets for iPhones. That’s what counts. Our Shakespeare-fanatic daughter went to The Tempest with Brynja and Emina. The next morning we wolfed down weak coffee and stale pastries, then started the last leg of our road trip.

Hot dry winds of the Mohave Desert lulled the kids to sleep as we drove through Nevada and California. I worried much more about the engine temperature gauge now. But the car drove well. We bought this 1994 Camry after our Subaru Legacy threw a piston 3 months earlier. Our plan to sell the car in California before flying to NZ had made everything feel temporary–a one-way trip. It had been our home for two weeks and the car served us well. It afforded us some quality family-bonding time. Yes, occasionally, it felt like family bondage.

The cassette player was defective in an odd sort of way. Only the chorus and harmony could be heard. This made family sing-alongs rather difficult. (After we explained to the children what a “cassette player” was) So, we resorted to alphabet games, 20 questions, and iPhones.

Our first and only family trip to Santa Monica Beach was slightly overcast, making sunscreen unnecessary! Alas, olive-skinned Milo faired well. But the rest of us suffered painful burns for the next few days. Two miles from the beach, we had excellent vacation housing with Dylan and Max. Being around Max made me miss Spencer–the youth, vitality, and optimism. And hanging out with Dylan is more fun than any LA Comedy Club act!

We managed to sell our car at the 11th hour, literally–11 PM the night before flying to New Zealand. I miss the car only a little more than I miss Harsha, the buyer. Harsha was indecisive, reluctant and guilt-ridden by time he showed up to take delivery of the vehicle. Our relationship was a rocky one–fraught with broken commitments, apologies, and mutual suspicions. When Harsha backed out of the deal two days before our flight, I shared my despair and pitched one last “take it of leave it!”–more of a haranguing than a sales pitch. Surprisingly, Harsha changed his mind. And I fully expect he changed his mind again driving the car to the DMV. So be it.
There has never been a more radiant smile of joy as Milo’s the night we settled into our seats on Air New Zealand. The kids buckled up and tuned into their own private media stations–LED screens with free headphones, movies, video games, the works. We did nothing but sleep, eat, watch movies, and pee for the next 13 hours. The time passed quickly. A friend picked us up at the airport and drove us through thick fog to our new home.