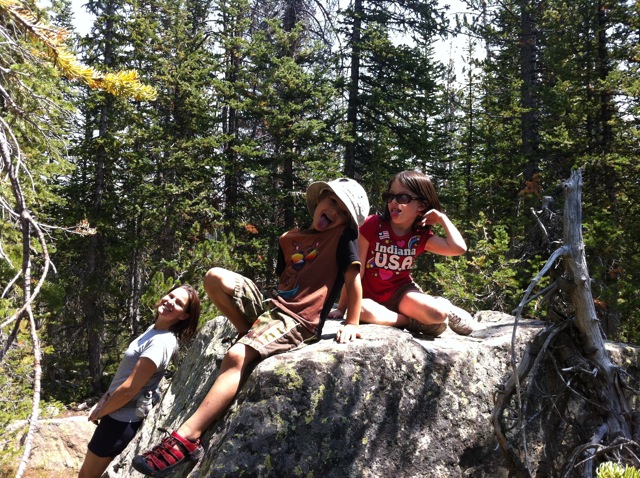 Well, perhaps these “family updates” are more for our benefit than yours. But I’ll will share them nonetheless.
We just arrived home from the Unitas. Our “family reunion” netted 10 family members out of 29, but who’s counting. Besides, it’s quality, not quantity! (Just ribbing the non-attendees.) Thanks to Val, Joe’s son’s spouse’s father, we all slept in warm beds instead of cold tents. The cabin was convenient and cozy. Thanks again to Joe’s family.

We lost each other somehow on our trek to Crystal Lake. So, Brynja and I took the kids and hiked to Wall Lake–only one mile from the beaten path, with hundreds of other hikers. Yet, we still felt far removed from the doldrums of civilized life. The kids had a blast as usual–turning large rocks into royal thrones, small rocks into stepping stones to avoid “hot lava,” and dead tree trunks into balancing beams. They were either yelling at each other in a fierce competition to be the “leader,” running past each other on the trial, eating dust and tripping on rocks. Or, they were holding hands, playing 20 questions (Milo never really deciding on the object of thought until Sophie became exhausted. Then it was always some obscure name of a Pokemon or Skylander.)
Sophie is slowing growing into her teeth. And although she looks as if she could easily gnaw through industrial cable in a matter of minutes, she looks adorable. Her latest baby tooth hangs by a thread and she wiggles it incessantly with her tongue. “How are you doing Sophie?” is often answered in silence, with an open mouth and proudly displayed loose tooth.
Sophie has developed a mild obsession with Hamlet, as performed by the local Youth Shakespearian group. As the longest ever written by Shakespeare–a four full hours–I often nodded during the play. With glassy eyes, I’d glance over at Sophie on the edge of her seat, listening intently to every line. She demanded permission to attend again the next week also. So we cajoled a friend to take her. I thought it strange that I was forced to stay up way past my bedtime, 10 PM, waiting for my seven-year-old to get home from “hanging out” with a bunch of prime donne teenagers (she’s become a devoted groupie of the cast.)
Milo is good at Monopoly–quickly learning the exquisite joy of collecting fees from unsuspecting trespassers on his private property. “I’m rich,” he yells, standing in his chair doing a butt-wagging dance. It brings back great memories of playing with John. (I do remember when John slipped his hand under the Monopoly board and flipped it high into the air at the prospect of having to pay hefty fees for landing on Boardwalk.)
Milo is excited to start elementary school. But he struggles to hold his pencil correctly. The other day, Milo, Sophie and I were in a coffee shop, sipping chocolate milk and writing letters. While showing Milo where to place his fingers around the pencil, above the soft ambient music, he suddenly erupted. “I AM IN CHARGE OF MY BODY! YOU’RE IN CHARGE OF YOUR BODY AND I’M IN CHARGE OF MY BODY!” All I could do is keep my head down. Thanks a lot public education!
Lastly, we are considering places to go for sabbatical. This is a bit premature, but we are considering (if we form the right connections) living in New Zealand next year with a few months in Indonesia beginning spring of 2012 for one year. This is still up in the air. But we are looking for connections to New Zealand and ways to rent our house out for a year. If anyone knows anyone interested in renting a place in lovely Logan for a year, let us know.
Bye for now! I have posted Spencer’s latest update on our family blog. windkohler.com 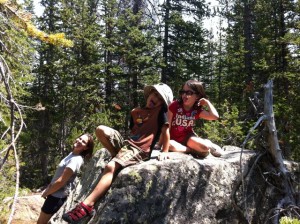